The environments in Godfall made quite the impression on me when it launched late last year, especially in regards to its environmental art. We’re about to see even more new areas thanks to the game’s upcoming expansion, Fire & Darkness. To get prepared, I was able to send some questions to a few of the members of the game’s team regarding Godfall and its upcoming expansion. The questions were answered by Chris Ha, co-founder and studio art director; Evan McKnight, lead environmental artist; and Tim Simpsons, environment art director. Additionally, we got an early look at some exclusive concept art.

Without further ado, let’s jump into the questions and answers.

PCI: What were the main influences behind Godfall‘s environmental design?

Chris Ha: The original point was to create an otherworldly feel [of] ancient, opulent, powerful, and luxurious lost civilizations. We wanted to make everything somewhat shiny and reflective so the player could feel that refined craftsmanship and the exotic materials. Some references we used for motifs and materials from luxurious hotels architectures and interior designs [sic].

Tim Simpsons: For the Fire realm, we really wanted to lean into the volcanic materials, lots of cooled lava rock formations and black glassy surfaces. We also took some inspiration from brutalist architecture for some of our structures to give it a heavy, militaristic feeling on top of the more organic landscapes.

PCI: There’s a lot of ornate architecture everywhere in the game world. What was the process like when it came to making these structures not only believable but still fitting within the fantasy world you constructed?

Ha: We’ve spent time looking for real-life exotic materials. Making sure they feel believable and touchable. Ornamentations are a big part of defining the style of Godfall. We wanted everything to feel like it was crafted by powerful and grand civilizations with a taste for luxury.

PCI: I’m very fond of Godfall‘s texture work. What was your main focus when it came to ensuring texture fidelity?

Evan McKnight: From the start of production, one of our main goals for Godfall was to ensure that all the materials were extremely high quality and unique. We put a large emphasis on material definition and specular response. We have an extremely talented material team and they created almost everything from scratch. We were also lucky to have some very talented shader artists that gave us the tools to really make things shine!

PCI: How do you decide on the right color palettes for each of the game’s zones?

Ha: Depending on what we wanted the area to feel, we’ve created a specific color script of each zone. We wanted to make sure players could look at a screenshot and be able to tell in which Realm it was from at a glance.

McKnight: Color palettes would often evolve over the course of production until we landed on something that clicked with each zone. Typically, we would establish a first pass in the concept phase where we would settle on a primary palette. We would then adjust accordingly as we began introducing all the assets and lighting, often choosing a few bold accent colors that complimented the main palette along the way. 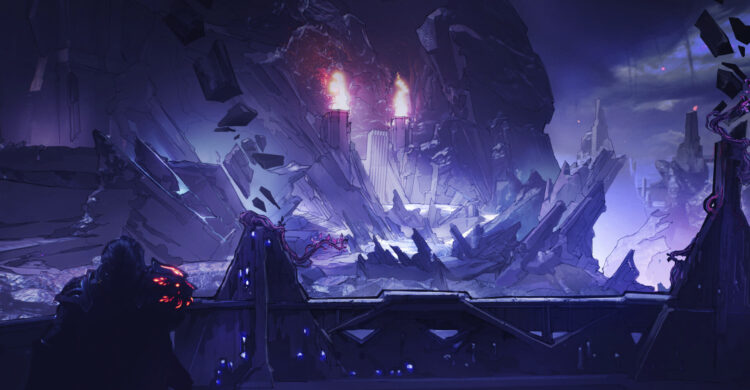 PCI: The environments in Godfall feel like they’ve been through a lot. What’s the hardest thing about making sure a location ends up feeling lived in and packed with history?

Simpsons: It was important to give each of the biomes its own unique look and cultural feel to the architecture, and always try to find that blend between sci-fi and fantasy. Too far in one direction and it feels too much like Lord of the Rings, too much sci-fi and it feels like Star Wars. We wanted each place to feel old and lived in, but also newly destroyed in some spots due to the new conflict. We basically construct a lot of these spaces in an unbroken state and then reverse engineer the aging and destruction so it feels natural and lived-in to the player.

McKnight: For Fire & Darkness, we set out to create a completely new zone with its own unique culture and practices. This meant working closely with the writing team early on so that we could learn as much as possible about the inhabitants and how they went about their lives. This helped inform a lot of decisions when it came to putting the final touches on the environment. Of course, the final touches always seem to involve the most creative effort! As artists, that last bit of polish is our opportunity to do some interesting storytelling. It can also be the most challenging, as we must maintain originality while ensuring things fit with the established narrative. 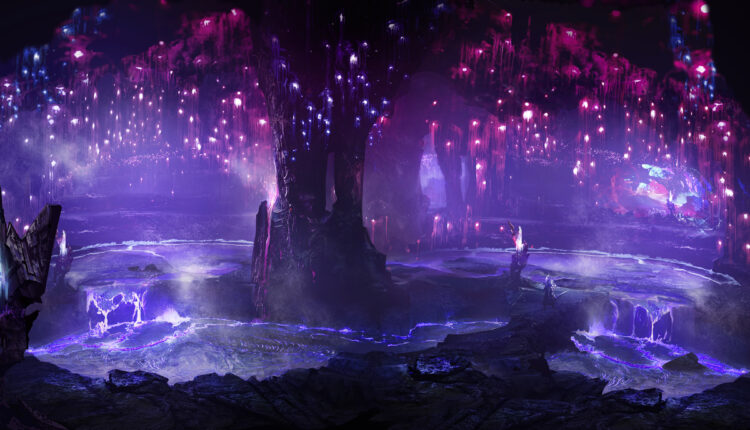 PCI: Is there anything about the visuals that you are unhappy with or would like to tweak in the future?

Ha: The environment team did an amazing job! I wouldn’t touch any of it! I’d personally spend more time on some characters/creatures.

PCI: There’s an expansion coming soon. Were any steps taken to massively differentiate the environments for the new areas, or do they very much fit within the same kind of ballpark as the ones included in the base game?

Ha: We’ve made sure to create a distinct Realm with its own specific color script and feel for the expansion. So it will feel different but will definitely fit perfectly in the World of Godfall. We wanted to create very different moods within that Realm and lots of new enemies and weapons. I hope Players will enjoy them all!

Simpsons: For the Fire & Darkness expansion, we wanted to stick to the core visual ideas like beautiful looking environments, high-end materials, and a bright color palette. However, we also needed to create a new experience for high-level players. Some of the intro areas to the Fire Realm are a lot more moody and ominous-looking to up the ante and feel far more threatening and dangerous.

We’d like to thank Chris, Evan, and Tim for their insightful answers to our questions. We’ll have more on Godfall: Fire & Darkness when it launches on August 10.

Note: This interview was edited for clarity purposes.

“The Mandalorian” season 2 introduced a number of new characters and brought back some old favorites. Let’s just say Mando wasn’t