Actress Alia Bhatt is all praises for her Rocky Aur Rani Ki Prem Kahani co-star Ranveer Singh for this newly released film 83. Alia, ahead of the film’s release, took to her Instagram handle to pen a heartfelt note hailing Kabir Khan and Ranveer for the film based on India’s 1983 World Cup win.

Sharing a poster of the film, Alia wrote on her Instagram story, “Phew! 83! Kabir Sir, I have so much to say and still, I have no words. It’s not a movie that can be boxed into a post along with a few adjectives! It’s an experience- a part of history that’s nothing short of magic! There were so many moments when I wanted to clap scream cry and dance at the same time! Pride, joy, unity, friendship, inspiration, I mean the list can go on. You walk out a different person after watching this beautiful film! Thank you for this film!”

Alia wrote another note in a different story on Instagram, where she expressed her warmth on seeing Ranveer’s performance in the film. She wrote,  “Tuts! Kaps! What to say. I mean. What are you? Some sort of genius mixture wrapped in with some loaded feeling peppered with magic every few seconds! I’ve said this to you before – your eyes changed!!!!!! You don’t act and – you live the character! Can’t do can’t do- you’re too good pls go to sleep for years so we can all catch up with your brilliance! Actor to actor Thank you for you! To the entire team. Producers, technicians, actors, coaches! Congratulations!!!!!!!! You’ll have created and contributed to what will be a milestone in Hindi cinema!” 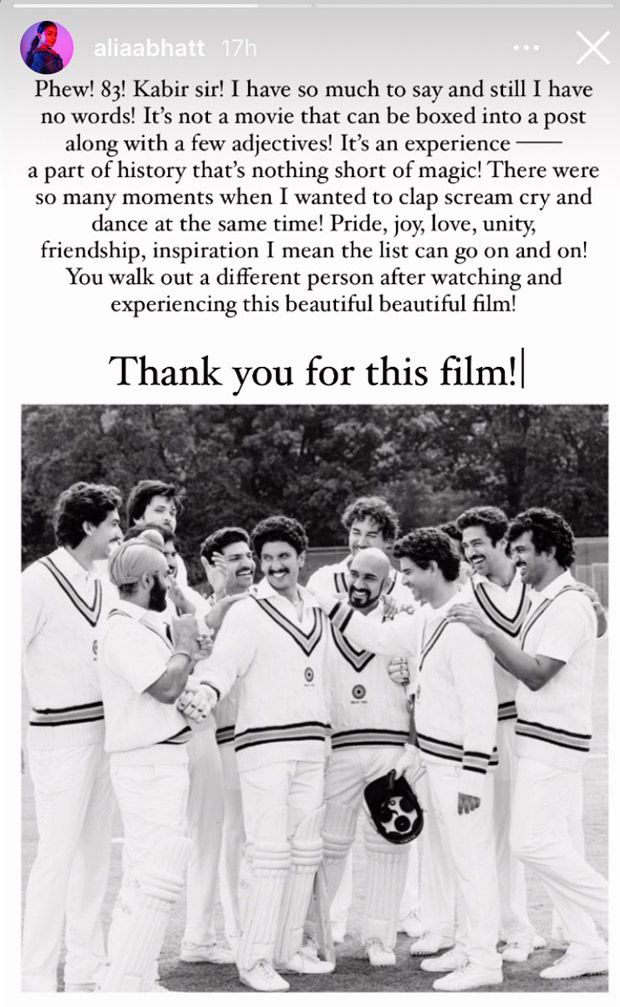 EXCLUSIVE: Sushmita Sen on Aarya 2 and changing Indian cinema- “The characters I played did not work because it was ahead of its time” : Bollywood News – Bollywood Hungama